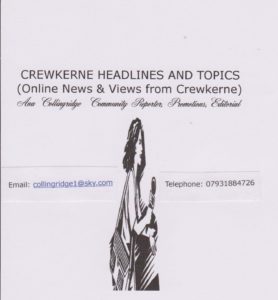 Crewkerne Headlines And Topics provides online news and views from the South Somerset market town of Crewkerne. The website, editorial content and photographs are administered, facilitated and edited by Ana Collingridge.

Ana is a freelance writer, community reporter and promoter of news and events, based in Crewkerne. From her first paid position with the Honiton News, back in the 1970’s, Ana has always been at the front of her local community, supporting and promoting its organisations and activities. In the late 1980’s, Ana launched ‘Ambience’, a quarterly magazine in her native town of Honiton, East Devon. The magazine was in many ways, a fore-runner to the community news pages, found in local newspapers today!

Several years later, Ana became a news correspondent for daily and weekly newspapers, based in Exeter and in East Devon. A childhood ambition to become a full time reporter, came to fruition in 2006, when under her former married name of Ana Doble, she worked for a weekly Beaminster newspaper, transferring later to the Crewkerne edition and central press office in the town. Ana has seen many feature articles published in county magazines, written food and drinks reviews for the Somerset Food & Drinks Guide, provided editorial for national petitions and is a guest columnist for the South West Connection magazine. Back now in her ‘reporter shoes’, Ana is enjoying every minute of it. ‘Keeping you informed of the news and events in Crewkerne, that you’ll want to CHAT about!